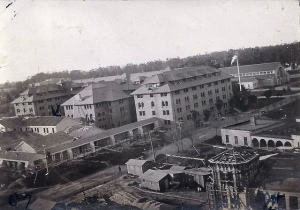 Encina Hall and the just rising tower of Toyon Hall.

At some point in our tour of the emerging Stanford Libraries North, amid the clang of hard work, our guide made a remark along these lines. When doing a renovation you work with things that can’t be changed, walls that can’t be moved.

A wall which cannot be torn down.

There are in fact literal walls inside of the shell of the old GSB building that cannot be moved without costing millions of dollars, which is yet another type of wall. Certainly there are many restrictions on Stanford Libraries’ new acquired building: large concrete columns that are hauntingly reminiscent of Meyer, solid walls which block all passage of light, an amphitheater with a flexible floor, a slew of building codes, safety concerns, and little surprises (like unexpected pipes) left off the building plans.

Pipes which were not listed in the building plans but were found hidden in walls by the main entrance.

These concerns are not just aesthetic but some are tied to critical design choices like furniture placement and location of electrical outlets that can potentially create a welcoming and useful study place. How does SUL deal with this rigid inflexibility of prior structures?

Somewhere between plans for the old GSB and SUL North.

To combat the baggage brought on by inheritance I believe that the Stanford Libraries have taken a page from the School of Design.

The resilience and tenacity of our guide, Beth, seemed to rise over even the loudest machinery. She spoke carefully and fluidly, often punctuating a sentence or two with “I think”. She did not make normative assessments about her choice to have open study spaces with few closed off offices. She often just merely highlighted features.

Beth believes that living in an inherited space means learning to be flexible. She showed clear and earnest interest in tracking the results of her changes and recounted how she dealt fluidly with a company’s choice to add a storage place, reducing the size of one the planned study rooms by a third.

Though not the ideal solution, or the planned one, it is clear that the design adjusts to the needs of both students and building codes. While some might claim that this might be impossible (a huge research and communication burden), I would ask if they could name any other process that would guarantee student and university stakeholders in a building.

One of the flexible classrooms in Meyer with a good deal of natural light and furniture that is not locked to the wall. 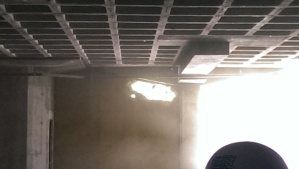 Making Windows in a concrete wall, the power of construction.

The design of the new Stanford Libraries North does not only hinge on the ability to flexibly inherit the space but also a genuine drive to create a naturalistic and not closed off space. Beth wants to create a safe study space which has a design influenced by contemporary research on the influence of natural light. It was clear that even the walls surrounding the GSB would have to come down in some places for this natural light.

With these two distinct goals, a desire to be fluid and a strong pedagogical belief (that is: natural environments encourage studying and comfort) the design of SUL North is a work that attempts to marry change and tradition. It seeks to find how to use old material to make new and compelling structures. This is only accomplished through clear communication and transparency between those who are building something and those who are designing it. I think that I saw this type of synthesis much more at the SUL North site than any of the other buildings.

The DevCon project manager explaining some of the structural logistics.

The EBF Kitchen is an industrial kitchen certified by the State of California to be used by a household of 54 people for personal meals as well as large scale dinners for the entire house.  With a mixture of veterans of cooperative living (on campus) as well as people fresh out of the dorms, the group has one informal learning goal: to learn to cook and clean on one’s own. While there are specific goals within the job system, for my report I would like to focus on this goal and rephrase it slightly: how to cook and clean on one’s own in a kitchen that you share with a large number of people.
Replace “cook and clean” with any other activity and I believe that the cooperative kitchen represents an important overlap between University standards and student driven attempts to create a community that is authentic and individuated. Re-designing such a space takes mediating the concerns of students (who daily use the space to cook and clean for themselves and others) as well as the concerns of the University (an institution dedicated to pedagogy with several Federal and institutional standards to maintain). I believe this space is unique, especially from ones we have been discussing, since it is not simply a matter of applying pedagogy before deciding on technologies, but also a matter of considering individuated preferences for learning, an institutional direction for pedagogy, as well as a student created community with its own history of “norms” and what I might call pedagogies.
My research project will focus on how to cater to both of these interests. Namely, how to create a system that maintains university norms and allows students to manage themselves efficiently and cooperatively. On one hand I will be focusing, then, on the norms of the community, the signs they choose to post, and the job system they have created to teach this responsibility. On the other, I seek to understand the structure that the university applies to these learning spaces and discuss any physical changes to the space. Not only do I think this will help to make the EBF kitchen a more effective learning space for residents, but also to help create a paradigm for the communication between student communities and University policy.
I think this has been my greatest “aha” moment. I had been approaching the project mainly from my viewpoint and trying to apply my theoretical understanding of “cooperative living”. While this might be useful for understanding my own relationship to the community around me, it will not serve as any useful data for future action. I hope to really investigate the connection between University policy and student community needs on campus and lay ground work for more effective communication.
Some ideas I have been thinking about:
– having residents draw maps of the kitchen and looking to what they emphasize, what they leave out, and maybe also having them circle what is important
– evaluating research on commercial kitchens and other common dining areas
– collecting data on cooking times, cleaning times, and developing other quantitative measures of competency in a kitchen
– figuring out the university’s opinion the mutability of these spaces as well as if they see learning to live in a community as a learning goal of their residences
working with interview data from a New Resident, a Veteran Resident, and a stranger to the house in order to understand perceptions of the space
talking to the future staff about what they perceive the needs of the kitchen to be
Some things that I think prior to research that should happen:
– better shelving in order to hold all of the dishes in an organized way that is easy to use
– better signage but am unsure what type of signage works best, hopefully will see more examples on our tours
– more scheduled times to clean that are informal and not part of the system but sort of a time for everyone to join in, this could also work with cooking